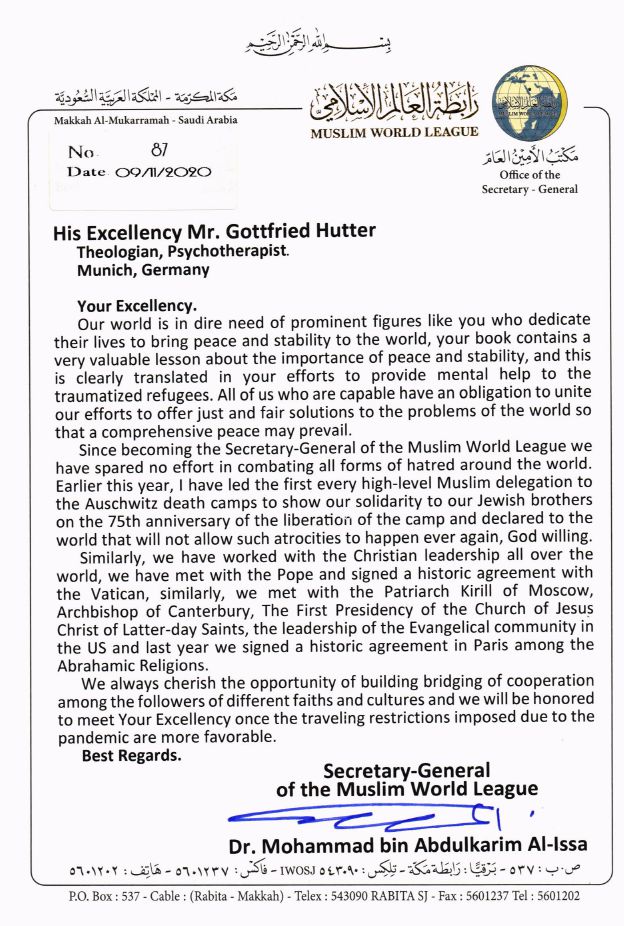 Our world is in dire need of prominent figures like you who dedicate their lives to bring peace and stability to the world, your book contains a very valuable lesson about the importance of peace and stability, and this is clearly translated in your efforts to provide mental help to the traumatized refugees. All of us who are capable have an obligation to unite our efforts to offer just and fair solutions to the problems of the world so that a comprehensive peace may prevail.

Since becoming the Secretary-General of the Muslim World League we have spared no effort in combating all forms of hatred around the world. Earlier this year, I have led the first every high-level Muslim delegation to the Auschwitz death camps to show our solidarity to our Jewish brothers on the 75th anniversary of the liberation of the camp and declared to the world that will not allow such atrocities to happen ever again, God willing.

Similarly, we have worked with the Christian leadership all over the world, we have met with the Pope and signed a historic agreement with the Vatican, similarly, we met with the Patriarch Kirill of Moscow, Archbishop of Canterbury, The First Presidency of the Church of Jesus Christ of Latter-day Saints, the leadership of the Evangelical community in the US and last year we signed a historic agreement in Paris among the Abrahamic Religions.

We always cherish the opportunity of building bridging of cooperation among the followers of different faiths and cultures and we will be honored to meet Your Excellency once the traveling restrictions imposed due to the pandemic are more favorable.

of the Muslim World League

Al-Issa is considered a leading global voice on moderate Islam as well as a key figure in the fight to combat extremist ideology. Religious leaders and government officials alike have commended Al-Issa for his efforts to promote moderation, and cooperation and coexistence among all people.